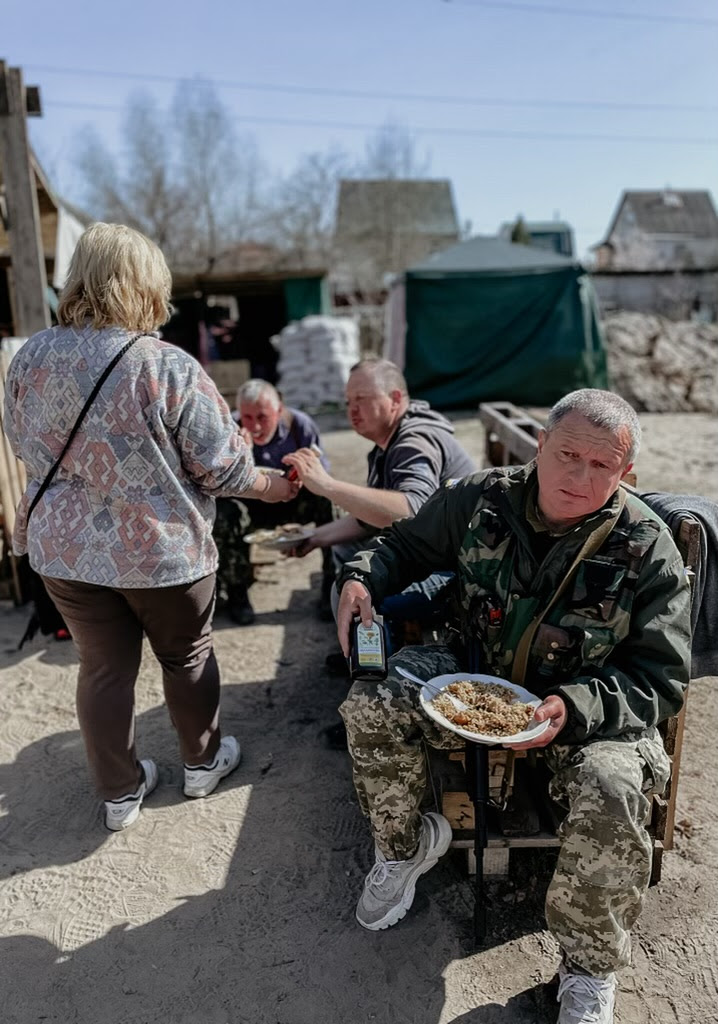 This is Larissa. Before the war, she was a teacher. We met her as a cook at the military checkpoint.

She cooks for the 140+ volunteers at the checkpoint to support her homeland. That means preparing meals on the open fire and under the open sky in the wind, weather, and snow. Most men at the checkpoint have sent their wives and children west. We see how Larissa has adopted them – she often asks us if we could bring warm shoes for the men standing in the cold, shampoos, and razors.

Nationwide, 2 million Ukrainians have volunteered for territorial defense since the beginning of the war. They left their regular jobs and are not getting paid, evacuated their families – you can imagine that Larissa does more than just cook. She holds the whole checkpoint together.

Larissa had many offers to leave the country for Canada or Switzerland. But such offers tend to infuriate her – She says, “How could I go anywhere and enjoy my life while our men are here defending my homeland?”

A few days ago, we came to the checkpoint in the evening. Frustration and anger were in the air; it was just before the Orthodox Easter. Larissa said they wanted to hold a small service at the checkpoint on Easter Sunday. They had already agreed on almost all the details with the Orthodox priest when they asked him a crucial question: Do you belong to the Kiev or Moscow Patriarchate?

The Ukrainian Orthodox Church officially split from the Moscow Patriarchate in 2019. Many Ukrainian communities have formally switched to the Kyiv Patriarchate in recent years. It is not about theological questions but politics and money. More than 1000 years ago, the baptism of “Kyiv Rus” took place in the Dnieper River in Kyiv, and from Kyiv, Christianity spread to the Slavic world. Because of this, Kyiv is home to the oldest monasteries and churches in the Russian Orthodox world, the central place of pilgrimage also for Russians. Entrance fees and proceeds from the pilgrimage sites under the Moscow Patriarchate flow directly to Russia. The Russian Patriarch Kiryll is known for having close ties with Putin and for blessing missiles into Donbas, and so the Ukrainian church wants nothing to do with such a patriarch.

Larissa and the checkpoint commander were so upset because the priest lied. After it came out that his church belonged to the Moscow Patriarchate, they confronted him. A representative of the Moscow Patriarchate to lead the service at a Ukrainian military base against Moscow’s war of aggression is a difficult thing to swallow.

What upset Larissa the most was the priest’s dishonesty. She says a prayer at the church has always given her peace. At the same time, she sees the double standards and corruption of the clergy.

The checkpoint commander interjects, “In our Orthodox Church, they always say that we are lost sheep and servants of God. They say, ‘You are children of God’ in my friend’s church. What now? For my part, I would rather be a child of God.”

Japhin and I looked at each other, and I thought, If you would only open the Bible for yourself, you would find out who God is and would not have to believe in someone’s teaching blindly.

Out of nowhere, Larissa says, “What struck me about you from the start is your honesty. I know that you are Christians- but from which church are you from?”

We shared how the Bible guides our actions and beliefs and that we dont necessarily follow any person or denomination. We also explained that God hears our personal prayer and does not necessarily have to involve a priest, a prayer book, or an icon.

One by one, some soldiers come over to us and listen. In the end, we saw ourselves surrounded by many armed men hearing about our faith in Jesus.

No one there has ever heard of faith-life as we described. They asked us many questions and were clearly satisfied with our answers.

In the end, Larissa says, “I’ve had the feeling for a long time that I have to change something in my relationship with God. I like you guys’ honesty and way of life; I think I will make some changes in my faith life after the war.

Our hearts were filled with gratitude. I asked Larissa if I could pray for her. When I put my hand on her shoulder, she starts to cry.

I prayed that God would touch her and that she would not forget that touch of God.