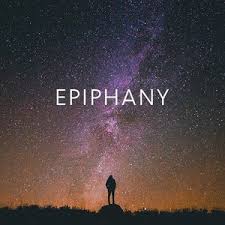 At Christmas we celebrated Jesus coming among us as the light of the world.  Jesus calls us to reflect that light to shine in the darkness around us.  We may not appreciate that we are to be salt and light to those around us, for although Christ is in us all, because he died for all on the cross, we may lock him up in the deeper recesses of our souls, and we are surprised when he reveals something to us which removes the blockage to allow his reflected light to shine out from us into the surrounding darkness. Now in the Season of Epiphany we rejoice in the fact that God can reveal himself to us in personal and special moments, the ‘Aha’ gear-shifting moments that many of us have experienced. An Epiphany moment then is when we are suddenly struck with a life changing realization which permanently changes one’s life.  God sometimes orchestrates these moments and gets our attention by calling us by name, for he knows each and every one of us intimately.

This reminds me of Tom whom I met some years ago at a Christian course in which I was a participant. He told me his story. He was a Salesman who spent much of his time driving around the country and staying in Hotels, living out of a suitcase.  He would spend most of his nights drinking and seeking out girls who would be willing to sleep with him. When seeing potential customers his main objective was to make the sale, even if this meant ‘pulling the wool’ over the eyes of his potential customers. He was making a good income. But it was a lonely existence.

One night he found himself alone and wondering about his life and its meaning. He wasn’t feeling good about himself and what he had achieved. Was there anything better than the existence he was leading?    Then something weird happened. He heard his name ‘Tom’ being whispered. He looked around. No one was in the room. He opened the door. No one was outside. Then he heard his name being called again, only this time it added ‘I love you’. ‘Who are you?” he said out loud. At this moment his eyes were drawn to the Gideon copy of the Bible and he felt drawn to pick it up and realized it was Jesus talking to him. He spent all that night reading through the Bible and next morning sought out a vicar and gave himself to the Lord. His life was completely transformed by his response to Jesus’s call on his life.

I am also reminded of the stories of Saul that you can read about in Acts 9:1-9. God also called him by name and his life was completely transformed and ‘the light’ of Jesus shone through him. He became Paul: a new man!   That experience was an Epiphany moment that completely transformed him; opening all the curtains in the window of his soul allowing the light of Christ to pour into and reflect out of him; bringing light to others.

Maybe he was asking himself questions about the real meaning of his life. Maybe he was feeling guilty over his treatment of Stephen and being affected by the light that Stephen was reflecting onto him. Maybe in the light of Jesus he was feeling unworthy. Whatever, maybe he, like Tom – deep-down – was seeking something different.

There are a number of other events recorded in the Bible where God calls someone by name, for example Samuel is called as recorded in 1 Samuel 3:1-10, and Jesus calls Zacchaeus by name (Luke 19:1-9). In all of these instances when the recipients of the call respond positively their lives are up-ended and completely changed.

Your epiphany moments may not happen in this way but God may get your attention through for example nature, a friend, the written or spoken word, a painting or through music. They all reveal something new about God and your relationship with him producing that ‘Wow!’ moment of revelation.

We are not told what his motives were for wanting to see Jesus, but we can assume that he had heard of Jesus and how he was able to forgive. Maybe he was asking himself questions about the real meaning of his life. Maybe he was feeling guilty over a lifestyle that was parasitic on the lives of others. Maybe in the light of Jesus he was feeling unworthy. Whatever, he was seeking something different. Maybe you have similar thoughts and reservations, but nevertheless are searching for something different.

Being a short man he could only see Jesus at the front of the crowd. But the crowd would not let him come forward, in any case they clearly thought that he was the last person that Jesus would want to see. Undeterred, Zacchaeus was determined to see this man Jesus so he climbs a sycamore tree. Here he could see without being seen! Are you similarly craning to see Jesus but hope he doesn’t see you?

To everyone’s surprise, not least Zacchaeus, Jesus not only knows his name but knows where he is up in the tree and invites himself to stay in this corrupt and dishonest man’s house.

Zacchaeus could have jumped down from the tree and run away taking his guilt and sickness of heart with him, feeling unworthy and too far gone for Jesus to care. Maybe also scared of what will happen when he is alone with Jesus in his house. But no, Zacchaeus responds immediately!

And what happens when he does?

His past corrupt life was cancelled and forgiven and his life was transformed forever. He was born again into a new way of living!

When God reveals himself to you, whether that be through an experience or through reading or another person or through an action of the Holy Spirit, the important thing is whether you respond or not.

Jesus knows your name and he hears the cries of your heart and he wants to tell you he loves you and wants to restore all that is wrong in your life.

Jesus is knocking on your door and revealing himself to you for he wants to stay with you in your heart! If you answer that call and let him enter your heart then your past will be forgiven and your life will be transformed into a new way of living.  Do you want that? I hope so.

If so you might like to offer up this prayer: “Lord Jesus Christ. I am sorry for the things I have done wrong in my life. Please forgive me. I now turn from everything that I know is wrong. Thank you that you died on the cross for me so that I could be forgiven and set free. Thank you that you offer me forgiveness and the gift of your Spirit. I receive that gift. Please come into my life by your Holy Spirit to be with me forever. Thank you Lord Jesus. Amen.”