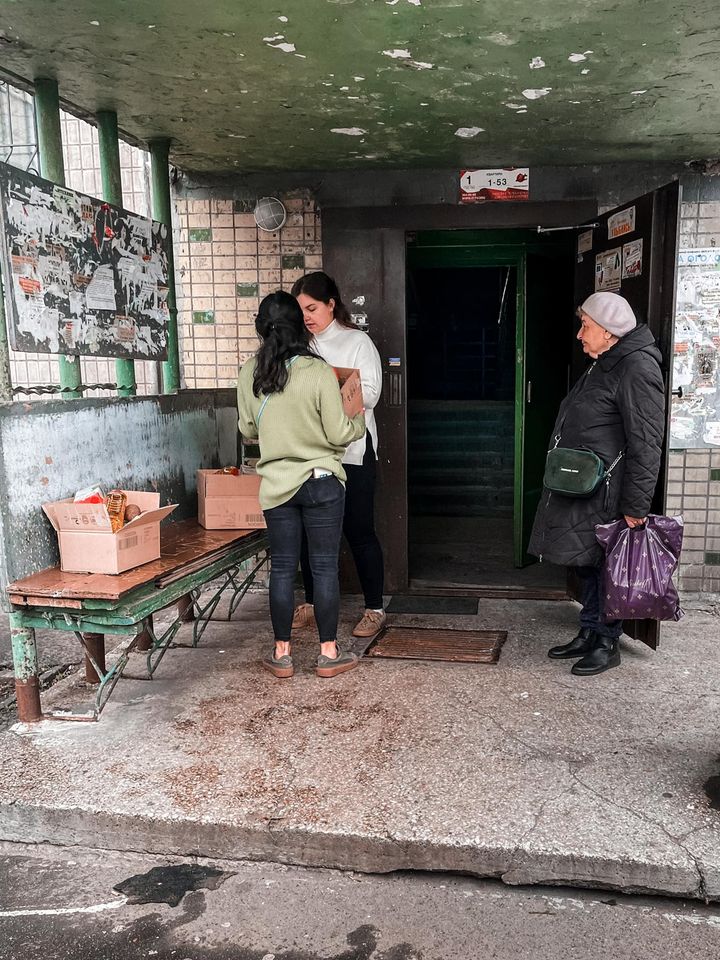 From Japhin & Marie John, serving with YWAM in Kyiv. As Christian Missionaries with Youth With A Mission, there is very little we can accomplish without a team of people praying for us.

One a slave of fear.

Another a timely Hero.

We went to 15 apartments today to deliver groceries. It was all in the same apartment building. As I stepped into the old Soviet building, I could sense a deafening calmness. I have been to many soviet apartments before. I know that particular smell they all share, the state of the art 1*1 meter elevator. But this one was very different. It felt lifeless; it felt dead.

We knocked on many doors, but people would not open. It is not because they are not there at home. We can hear people in those houses. They come to the peephole, and when they see strangers, they stay calm. Finally, one mama opened the door. Just enough to put her head out and see what we wanted. Right away, she asked, Are you good people? Did you come here to steal? – Marie laughed and said, do we come with a basket full of groceries to steal? She was not totally convinced, but she did let Marie in. I did not go in (a Brown man with a thick beard is not an image synonymous with safety

). When asked if we could pray for her; she said No; I am afraid you will curse me. We wanted to stay back and talk to her a bit more, but we noticed that she was so restless as she was so scared and could not relax as long as we were there. So, we wished her joy and health and left. She was afraid of being cursed, but in reality, she was living as a slave of fear. But such are the times; who is not afraid?

Nadia was not afraid; she was all dressed and ready for life. When she noticed that we were volunteers, she came to us and asked for some groceries, so we went to her home. To our surprise, she was not alone. There was a man in a wheelchair and a woman bedridden. When asked who they were, she said she did not know them, but someone left them, and they were without help, so she was taking care of them. I was amazed at what she was doing. Suppose I am in my 60’s, alone, in a war zone. I would want to look after myself and be ready for what war brings. But, Nadia was full of hope. (BY THE BY THE MEANING OF HER NAME IS HOPE; how cool is that) She sees meaning in investing in others. She sees value in life, believes in the dignity of human life and more than anything, has hope for a better tomorrow.

It is easy to hope for a better tomorrow when everything is well, but that is not the case when Russians surround your country from three sides. I think these two mamas’ lives are like portraits. There is a compulsion upon us to look at them, reflect, and check who we closely resemble. Nadia or the fearful mama?

I love the story of Peter walking on water. All the disciples were safe on the boat. But Peter gets this crazy idea to walk on water. And he did for a bit before he started drowning. The story ends with Jesus saving Peter and giving a lecture. Peter is painted as the loser in that story. But I think Peter is the brave hero, and all the other disciples who played it safe are the losers. Peter kept himself where he needed a miracle, and he got one. Others lived on to tell the story of Peter’s bravery and how their cowardliness kept them from seeing God come through.

If fear limits you from living the life God has called you to, then I am sure today, Peter and Nadia will hope that we will change our ways.