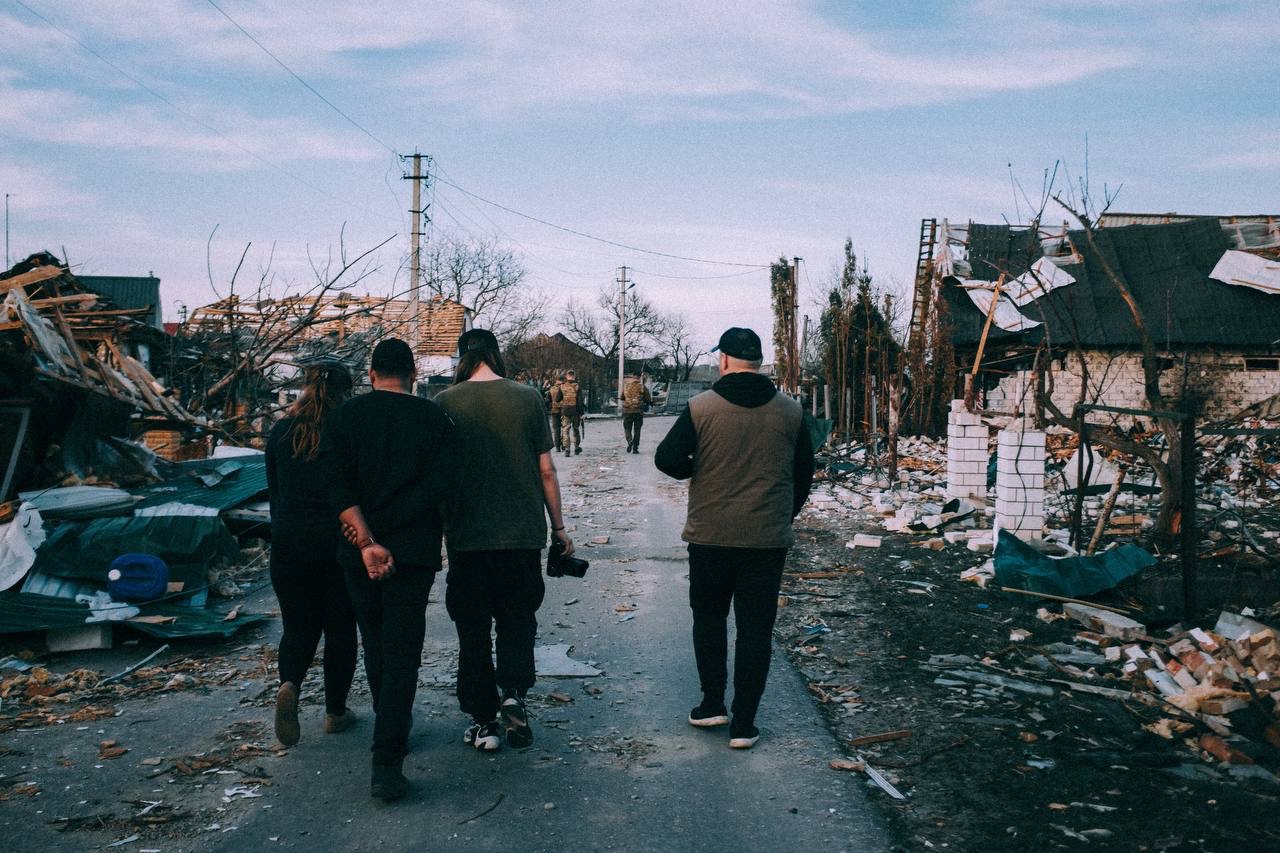 Marie John is with Japhin

“There is a life after war.”

This was the craziest statement I heard in the first month of the war. At that point, it had not occurred to me to think about a life after war.

It was as if time stood still from the 24th of February. Everything happened in the moment. We ate when we were hungry; knowing that if there was a missile strike close by, we would have to leave our home and stand outside in the cold for hours. Our phones were always charged, our laundry always washed – because we expected the electricity to be switched off at any moment. We went to 10-15 supermarkets per day, and finding four bottles of milk felt like a victory. We gave everything away right away. I tried to maintain a basic reserve for our small group of volunteers, but how can you store away things for yourself when the need around you is so pressing?

In these initial days and weeks of gathering from empty shelves, I felt like an Israelite in the desert, picking up manna. God provided every day anew. In the evenings, I used to go to our small storage room. Most days it was almost empty. I wondered, how would we cook for the soldiers and people in shelters tomorrow? What would we live on if Kyiv would come under siege? What comforted me was the commandment God gave the Israelites in the desert: Don’t store up for yourselves. Eat the manna until sunset. As they tried to save it up, it fouled away.

And God did not fail us. He provided again the next day.

Now, as the frontline has shifted to the East, our rhythm of life also changes again. Some might think you just need to press a “reset” button, and your mind goes back to February 23rd. It does not work like that.

The other day, Japhin and I met with a group of dear friends and missionaries. We were seven: Two from Mariupol. One from an occupied village north of Kyiv. Two from western Ukraine. The two of us from Kyiv. We all experienced these past 70+ days in very different ways. We came together to share our stories. Each ended their story with – “God was with me. I thank God for everything”. – Not for getting out. Not for being in safety. But for seeing God on our side all this time.

One of our friends asked us a question. It is a question maybe only someone who has experienced this war could come up with. “What was more difficult for you, the time of the bombing in Kyiv or now?”

The truth is; these initial weeks were easier in some ways. Living from hour to hour, looking up to the sky for airplanes and missiles, looking up to God as the only help and hope.

There is no going back to life as it was until February 23rd. We would not even want it. I think this war has forced us to reconsider our ways. In the end, the reality of war taught us to finally obey Jesus’ command not to worry about tomorrow. If you are not sure if there will be a tomorrow, there is nothing to worry about. If you are sure about it because you live in a peaceful country, well maybe you are holding on to an illusion and one day the reality of life will teach you otherwise.

If we truly mean it when we say the Bible is God’s word, then we have to live differently. “Don’t worry about tomorrow” is not a nice saying, it is a command that requires us to act. “Go and make disciples, teach them to obey all I have commanded you” is not a great suggestion, but the great commission. “What will it gain a man if he gains the whole world and loses his soul?” and “Life does not consist in the abundance of possessions” are powerful words that help us to get our priorities right and not get lost in the temptations of this present world.

So yes, there will be a life after the war. But it will be built on the lessons from the war. Let us all make sure that we cling to the word of God, that we obey it, so it would not require a war to learn it the hard way. An excerpt from a sermon of Paul Washer that always inspired me. It remains my prayer for the future of Christ’s church and missions.

“Oh, that God would raise up missionaries. I don’t wish the same things your parents want for you. They want for you security and insurance and nice homes. They want for you cars and respect. I want for you the same thing I want for my son, that one day he takes a banner, the banner of Jesus Christ, and he places it on a hill where no one has ever placed a banner before, and he cries out, “Jesus Christ is Lord,” even if it costs my son his life. Oh, when he’s 18 year old, if he says to me the same thing I said when I was a young man, “I’m going into the mountains. I’m going into the jungle.” And they said, “You can’t go there. You’re insane. It’s a war. You’re gonna die.” I’m going. When that little boy puts on that backpack, I’m going to pray over him and say, “Go! God be with you, and if you die, my son, I’ll see you over there and I’ll honour your death.”