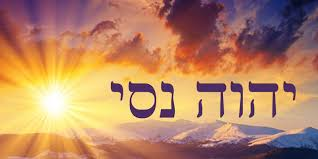 Let’s look at “Jehovah-Nissi” today – it means “The Lord my Banner.” The children of Israel hadn’t travelled far in their journey from Egypt to the Promised Land before they were attacked by the Amalekites. The battle wasn’t of their seeking – they were unprepared and ill-equipped. Moses encouraged them, saying that he would stand on top of the hill with “the rod of God in his hand.” (Exodus 17:8-16). Moses reminded them that it was from God that their help would come. Aaron and Hur supported Moses (The original PRAYER TRIPLET?).

God gave them victory and Moses built an altar as a memorial of their deliverance and called “Jehovah-nissi” – “the Lord is my Banner.” Now DON’T think of banners that hang in churches! A “nes” from which the word “nissi’ is derived was like a broom-handle, the top of which was covered in pitch and stuck into that was any thing that would act as a good reflector (metal, stones, natural glass etc).

When the people of God went into battle they always manoeuvred so that the sun was behind the enemy- so when the enemy came over the hill – they were “blinded” by the reflected sunlight that shone from their banners. It is a picture of the PEOPLE OF GOD. Look inside the church and “His Banner over (us) is love” (Song of Solomon 2:4). Outwardly God’s people are “As terrible as an army with Banners” (Song of Solomon 6:4). The reflected “Glory of God” is a powerful weapon.